Moving to a new country as a family, as opposed to a free-wheeling young adult, dumps you deep into the everyday minutiae in ways that’s hard to predict ahead of time. Our son attends a German/English bilingual school that runs on the local curriculum, rather than an international school (which are in English, and generally stick to North American IB programmes). Most of his classmates are German, as are the parents, and it gives us a window into local holidays. We didn’t celebrate Thanksgiving this year, as we were still getting settled in our flat and our son had a cold. I’m just getting to the put where I can figure out the names of the spices and the cuts of meat I need in German – I didn’t really want to start running around trying to find North American groceries in a small town. Next year I’d like to have a nice get together with our German friends and introduce them to our celebratory autumn meal. Remind me next September and I might get it together in time!

Halloween is not really a thing here, while the kids had a dress-up party at school, there was no trick or treating as far as we could tell. No pumpkins in windows or front steps. Stores had some decorations, but it was pretty low key. Halloween itself also happened to fall during Herbstferien, the autumn term week-long break. I warned our son about the lack of Halloween excitement ahead of time, and promised that Christmas is a Big Deal. Judging by the displays already up in the windows, 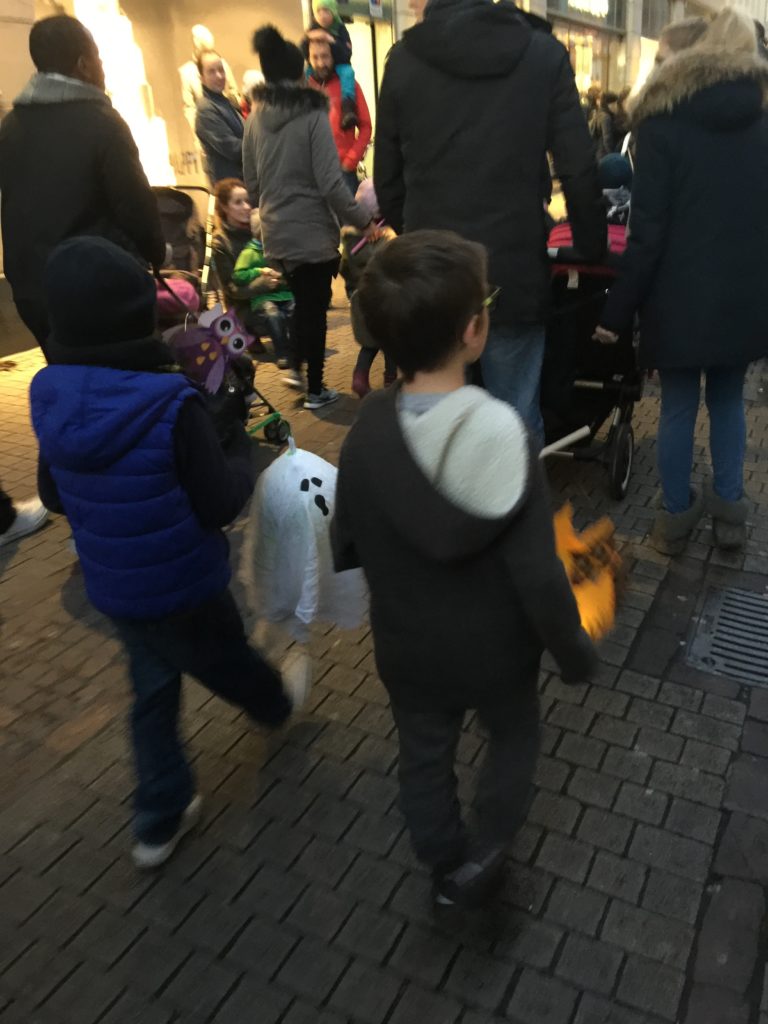 On November 11th, Germans celebrate St Martin’s Day, or Martinstag. We trundled down to our local main street, and followed an actor dressed up as Saint Martin in his Roman gladiatorial gear and riding a horse. The children carry homemade lanterns, and there were several marching bands playing Martin songs, which we didn’t know, but many others sang along around us. We reached one of the squares in the Altstadt to watch a very short play about Saint Martin tearing his cloak in half to give to a beggar, the tasting of the first glass of wine from this year’s harvest, and the handing out of Martinsmännchen, person-shaped sweet bread figures.

There’s something amazing about walking down these streets, knowing children have been running around waving lanterns every November for 400 years. It’s one of reasons I was so keen to move back to Europe.

The Weihnachtsmarkts start at the end of the month, and we’re lucky enough to have a particularly lovely one in our little town. Now I just have to figure out how to do Nikolaustag on December 5th.