I admit my knowledge of Colmar previous to moving to Germany was a sandwich named after the town that I really liked from Apostrophe in London about 10 years ago. So. Not well informed then!

Colmar is in Alsace, in Eastern France. Over the past few hundred years, Alsace, and its neighbouring region Lorraine, have been German, and then French, and then back again, many many times. As a visitor, this means you get lots of cute half-timbered houses and good sausages, as well as French country food and good wine. Alsace is a incredible wine region, producing Riesling, Pinot Blanc, Pinto Gris, Gewurztraminer, and Crémant d’Alsace. Lots of floral and fruity tastes dominate, but they are also quite dry. Terrific with roast chicken or turkey, and curries. 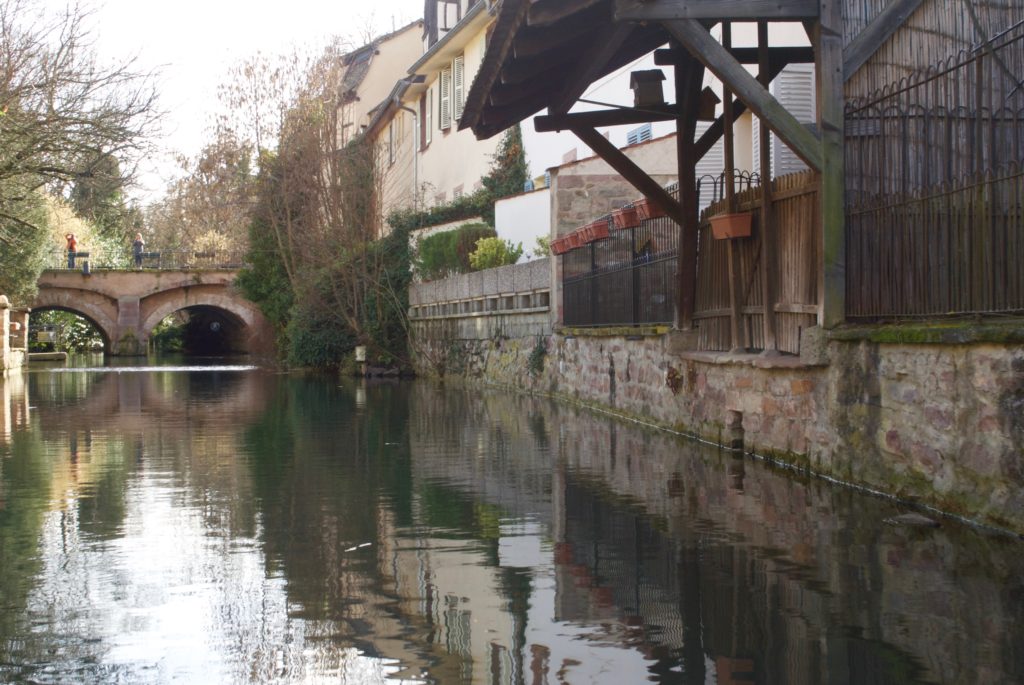 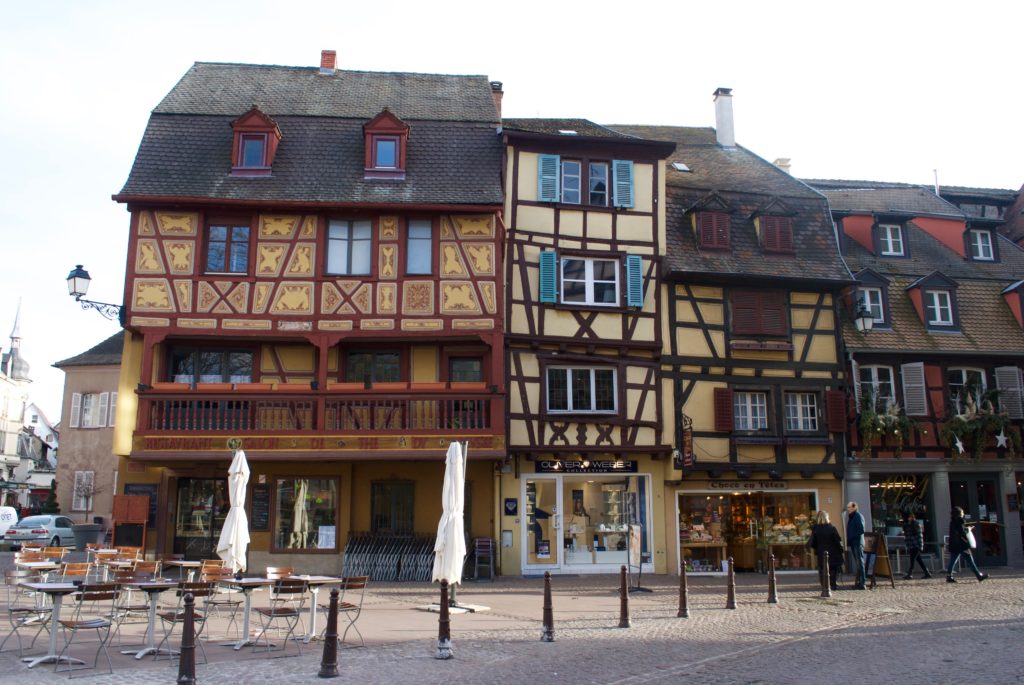 The town itself is beautiful and full of charm. It’s well worth taking one of the little ‘train’ tours, which are really trains on wheels pulled through the streets of the old town. It gives you an overview of the area’s history and train-mad small people will love it. Bonus: it’s only 40 minutes. Also check out the boat tour on the canal which is lovely, short, and mellow. The train tours have pre-recorded audio tours in many languages, but for the boat tours, you’re at the mercy of the language skills of your captain. I didn’t find much overlap between the two tours, actually. It is worth doing both. You won’t be able to take buggies on either of these tours, though the boat tour is connected to a pub, so I think you’d be able to leave your buggy there. The train tours leave from an outdoor tourist information kiosk, so it’s unlikely you would want to leave it in the street.

Colmar has several little squares and fountains, so there are plenty of places to let antsy kids run around. In the spring and summer, the window boxes are overflowing with flowers, and even the canal railings are decked out with their own flower boxes. It’s an infinitely photogenic place! We visited in February before the flowers came out, and as you can see from my photos, it’s still beautiful. 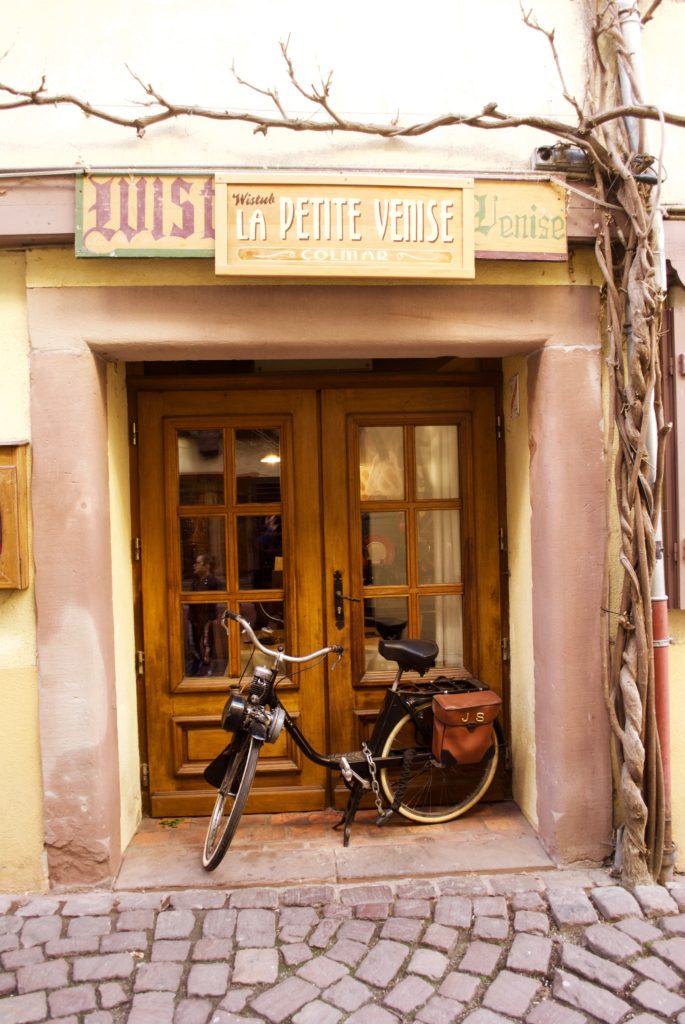 As usual, we preferred to wander the town and explore rather than visit too many attractions. Petite Venise is worth a visit, and the canal boat tours leave from here. As you wander around the town, look up. There are incredible balconies, statuettes, and elaborately painted panels above street level to ogle.

If you’re looking to go for a longer adventure along the Alsace wine route, the Trip Gourmets have a great overview of the route and where to go.

Flammkuchen or tarte flambée is king here, which is handy because it’s very kid-friendly. It looks like a big pizza, but it’s on a very thin, crispy crust and usually features a soft, mild cheese like Münster, together with thinly sliced onions and lardons or pieces of bacon. It’s quite rich, but very good. There’s also Choucroute Garnie, a specialty of the region. Imagine sauerkraut, but cooked in wine, and then make a pile of it, and cover it with various sausages, slices of ham, and some potatoes. It sounds terrifying, and it generally looks terrifying when it arrives at your table, but if you like sauerkraut at all, it’s great. This is not your slimy grocery store kraut, but a local specialty that locals take pride in. It’s worth trying at least once, but my advice is to share a plate of it, as I have yet to finish one by myself. 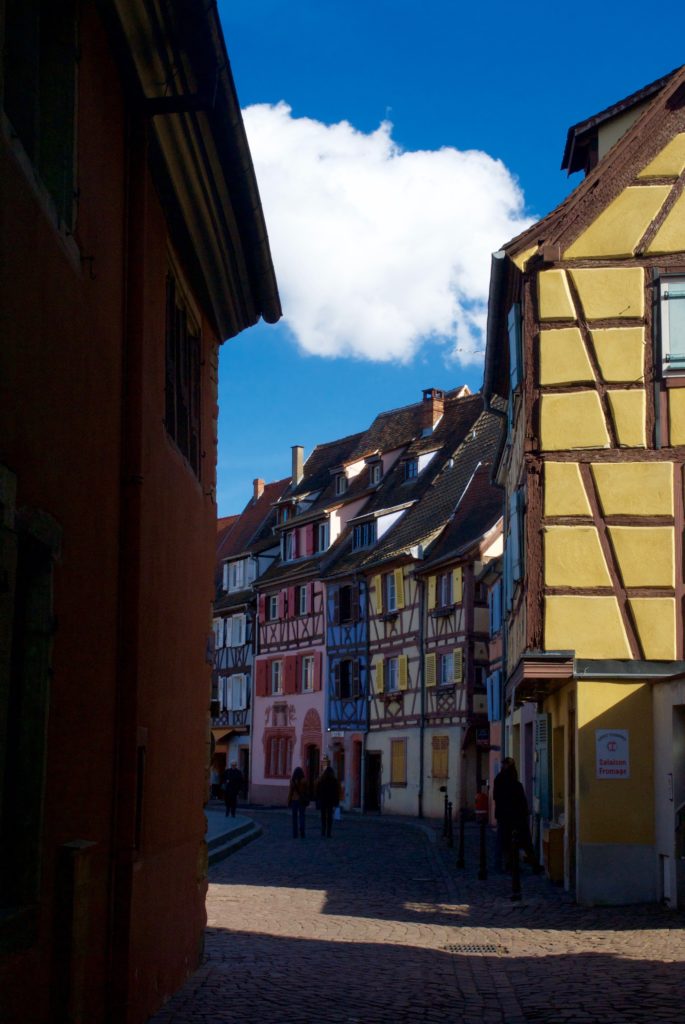 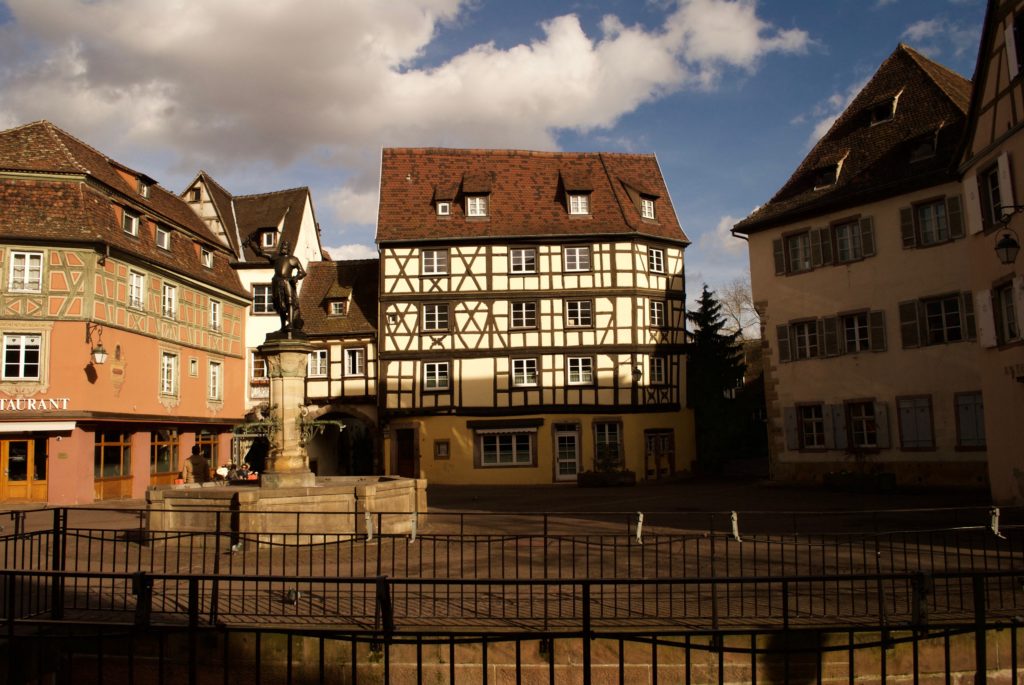 If you’re looking to save a bit, swing by the Market Hall, and pick up bread, sliced meats, and cheese, and a few local apples. There are lots of little squares, benches, and tiny parks nearby to devour your bounty. I had some incredible apples when we were there, as there are often little orchards dotted around the vineyards, and some local cider distilleries as well. It’s hard to beat a good baguette, nice cheese, and some good apples in my mind!

We were in Colmar for a day, and I think I could have easily spent two there. We stayed the night in a village a 15-minute drive away called Riquewihr. This was good fun, as the drive winds through the vineyards. When I saw ‘vineyards’, I mean every single spare square meter was planted with vines. I have never seen anything like it. There are loads of wineries along the route, all selling their wares from their own ‘cave’. Riquewihr itself is a picture perfect medieval town nestled at the bottom of some hills. There are old city walls, a clock tower, beautiful churches and a windy high street to wander up. I drove up it by mistake, you don’t want to do this! There’s a round that goes around the outside. I seem to be really good at picking routes that take us straight through very narrow old streets and tiny 15th-century city gates!

It’s worth noting that while it’s a beautiful little village, and accommodation is quite affordable, eating is expensive. It’s a stop on the popular Alsace wine route, and smack in the middle of the wine-producing region, so if you’re looking for a special meal with local wine, I’m sure it will be great. If you’re trying to feed a picky eater, and yourselves, without too much fuss, you’re going to pay a bit of a premium. We stayed at Hotel le Saint Nicolas and paid half-board for €29 for each adult, which covered dinner with salad and dessert, and breakfast. There’s a reduced rate for kids. For dinner we had the set menu for guests (there are no options if you’ve picked half-board) and had veal with mushroom sauce, accompanied by the biggest dish of spätzle I’ve ever seen, which is saying something as we live in southern Germany. 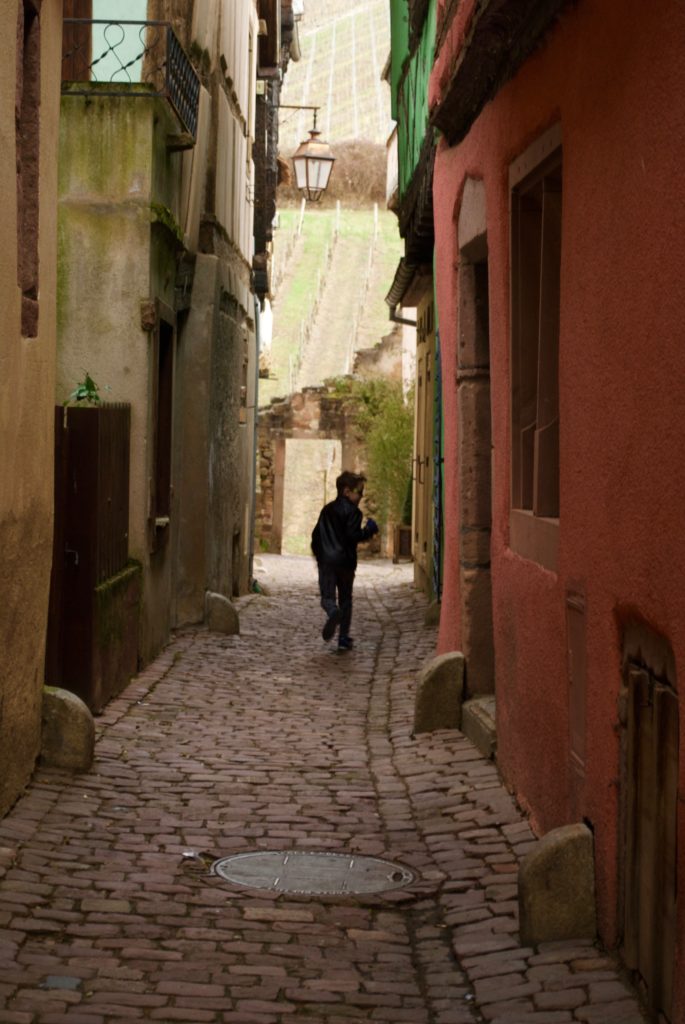 I quite liked the Saint Nicolas, it was down one of the little cobbled streets, and the staff were very friendly and welcoming. We were able to book a triple room, which is so great when it happens, because with one child we only need a double bed and a single, and our son got a real proper bed, not a pull-out sofa. It was very affordable, though there’s no wifi unless you troop downstairs into their lounge. It’s no bad thing, I reckon, on holiday, to have a bit of downtime that is not online.

Climbing up into the vineyards beside the village the next morning was lovely, and the views out over all the vineyards in the valley was just incredible. I could have spent another day here just hiking around, visiting the shops. There are the traditional Riesling glasses everywhere, with their distinctive green stems.

Even if you’re not a big wine drinker, this region is full of romantic charm, with winding roads, beautiful villages, cute canals, and flowers everywhere. It’s well worth a little two-day jaunt from Strasbourg.

There’s an airport in Strasbourg serviced by Air France and others, but most people will probably take a train, or come by car. Colmar is two and a half hours by train from Paris, and about three hours from Frankfurt. The small places like Riquewihr aren’t connected by rail, but it’s so close you could definitely hire a taxi for that distance. 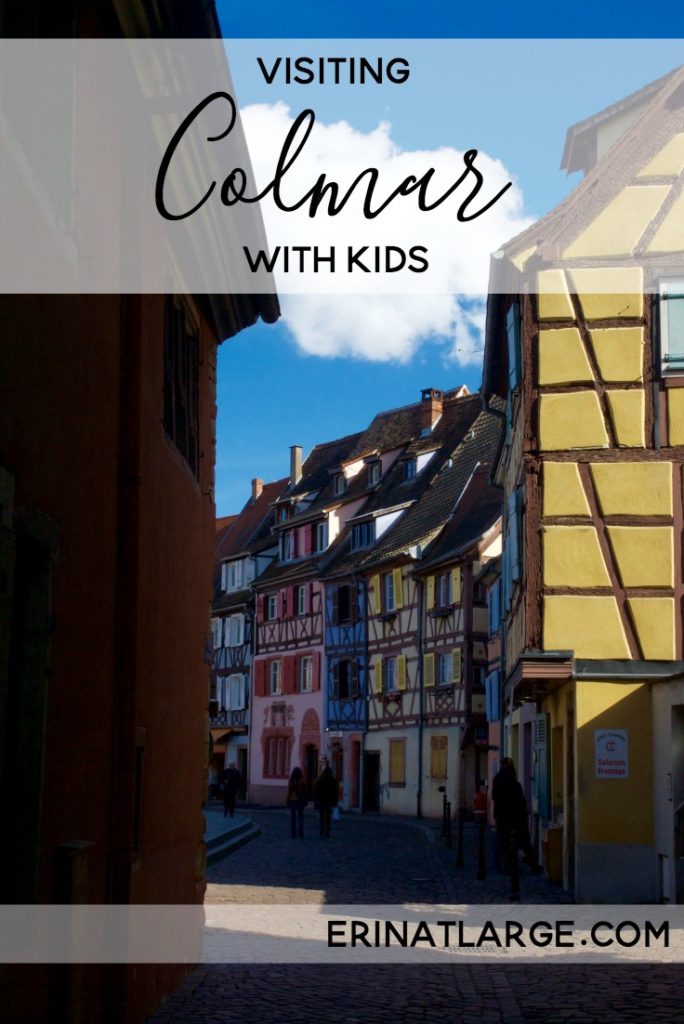 This post contains affiliate links which provide a small payment to me, at no cost to you. Thanks for supporting this blog.