Ah Vancouver, you are a beautiful city to live in, but so. much. rain. If you’re heading to my old hometown for a visit, it’s quite likely it will rain for at least one of your days. That’s not a reason not to go, however. Most locals will tell you to bring your rain gear and wellies and head into the forest. Somehow the rain seems just right out there with the giant Douglas Fir trees. However, if you’re not feeling like communing with nature, here’s eight ways to hide out from the rain like a Vancouverite:

I really recommend making this museum part of your visit, even if it isn’t raining. The building itself is beautiful, and a lovely place to experience the forest from behind glass. The collections will give you an overview of the impressive art created by the First Nations peoples from this area and further afield.
6393 N.W. Marine Drive, Vancouver

This is locals favourite, so if it is raining on a weekend, be prepared for lots of kids! There’s a great multi-level soft play centre inside, which is great for confident kids five and up. I say confident because it’s a multi-level structure that’s very hard to crawl around inside if you’re an adult, and the staff don’t let you go in with them unless your kids are upset. You can see them, but it requires some running up and down stairs if you need to have eyes on them all the time. There are lots of little shops, a very basic cafe, and a duck pond just outside if there’s a break in the rain. For food, I’d head to the Public Market by the water, the cafe in the Kids Market is not that great.
1496 Cartwright St, Vancouver

Personally, I would suggest giving the planetarium in the same area a miss, and stick with just the Maritime Museum. The building was actually built around the boat inside, which you can clamber all around. This isn’t a model, but the actual ship the St Roch, which was the first to sail the Northwest Passage from west to east. Don’t skip the rest of the museum, it’s very kid friendly and often completely empty.
1905 Ogden Ave, Vancouver

Going out on the water in the rain sounds like a bonkers idea, but the little ferries that run the routes around False Creek are covered. They are tiny, I used to call them the ‘bathtub ferries’ when I was a kid and I think their maximum load is 10 people. You can either hop on at the Maritime Museum or Science World and just ride to the other end (with stops in Yaletown, Granville Island and more), or ask about their tours. There are two companies, False Creek Ferries (blue boats) and the Aquabus (rainbow boats) – if you buy a return ticket make sure you catch the same one as the tickets are not transferrable, and double check the map because they don’t stop at the same places. You buy your tickets on board, cash only.

This science centre is on everyone’s rainy day list, so if you’re looking for something to do on a school holiday or weekend day, be warned it can be a zoo. There’s a good reason everyone goes of course, with several hands-on galleries and an IMAX theatre, as well as a picturesque spot on False Creek. There’s even a White Spot restaurant, a British Columbia burger institution. A new hands-on gallery has opened as of spring 2017 too.
1455 Quebec St, Vancouver

Head downstairs to the huge children’s section and rest your feet. There are puzzles, toys, a little soft play area, and many story times (just check the event listings for times). There are also several little cafes, including Flying Wedge, a Vancouver pizza institution, in the rotunda area outside (but still under cover). It’s worth checking out the little library shop for some neat souvenirs that support the library system.

If you come from a place with a giant botanical gardens, this may not be very exciting. However, locals do love the 1960s special that is the Bloedel Conservatory. Filled with tropical plants and flowers, colourful birds and insects, you can wander around in the dry biodome for awhile. The stretch of Queen Elizabeth Gardens right outside is a favourite for wedding photographers, and the views over the city are beautiful.
33rd Ave, between Cambie St and Main St, Vancouver

Ride the Skytrain to the River Market

You might not have noticed but the Skytrain does not have drivers on the trains. They are all controlled centrally, so you can claim the front seat for yourself (and a small person of course), and pretend you’re driving! This is a favourite activity for local kids too, as you can imagine. The ride from downtown out to New Westminster is quite pleasant, with the benefit of ending in the River Market, a newly renovated public market on the river boardwalk. New Westminster was the capital city of British Columbia from 1858 to 1866, and it has gone through a bit of a renaissance of late. There are lots of great restaurants in the market and nearby, and the boardwalk itself is home to several new playgrounds and the Fraser River Discovery Centre. 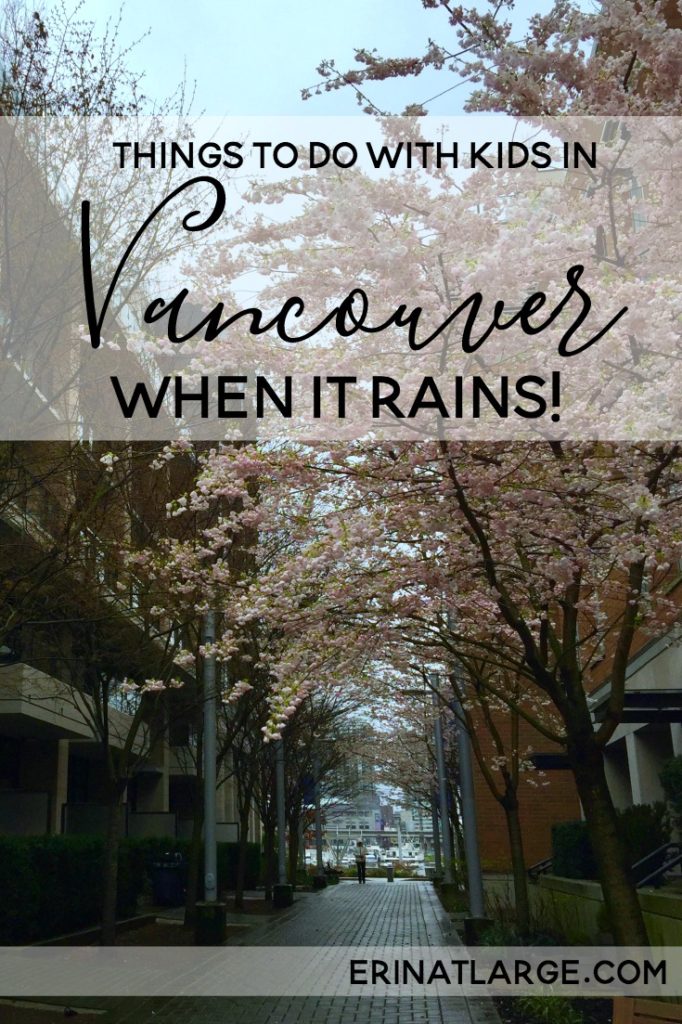